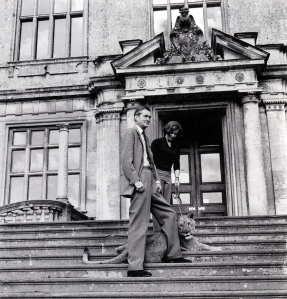 ‘The proper place for lions in an island that is spared them is in heraldry.’

When the 6th Marquis of Bath stood on the steps of Longleat in 1966 to unveil England’s first drive-through safari park, there was a storm of protest. ‘Cattle, sheep and deer ought to be good enough for a Wiltshire man,’ roared an indignant Times. ‘The proper place for lions in an island that is spared them is in heraldry.’

In fact Lord Bath and his business partner, circus-owner Jimmy Chipperfield, were merely bringing their gift for exploiting a commercial opportunity to bear on a long tradition of exotic animal-keeping in England, a tradition which dated back at least as far as the Middle Ages. Records show that a pair of lions were being kept at the Tower of London in the 13th century, along with a polar bear and an elephant. 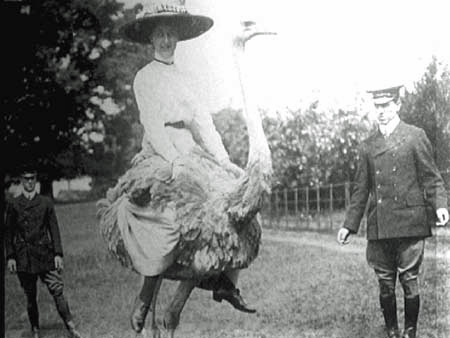 Smile! An ostrich poses for pictures at Ampthill.

The practice was popular in Edwardian England. Amateur zoologists used their country estates as settings for the display of live specimens, just as they used their baronial halls to show off the dead ones, stuff and mounted. Lionel Walter Rothschild drove around his estate at Tring Park (and occasionally, around London) in a carriage drawn by his zebras. Sir Anthony Wingfield kept a menagerie at Ampthill House in Bedfordshire; his butler supplemented his wages by photographing house-guests as they perched precariously on camels and ostriches, and selling the pictures to The Tatler. In the park at Woburn Abbey the 11th Duke of Bedford, President of the Zoological Society from 1899 to 1936, kept Père David deer and a herd of wild Mongolian horses captured in the Gobi Desert in 1900. 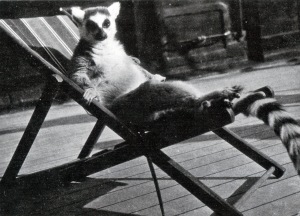 Mah-jongg – presiding over the Courtaulds’ household like a malignant house-elf.

Between the wars, exotic animals and birds became part of the landscape at a surprising number of country houses. Mah-jongg, Ginie Courtauld’s ring-tailed lemur, who presided over Eltham Palace like some malignant house-elf until his death in 1938, is perhaps the most famous. Rothschild’s collection at Tring Park was open to the public. Woburn was well-known: the Père Davids were saved from extinction by the Duke of Bedford’s action in acquiring them, and their descendants still roam the park. Wingfield maintained parts of his Ampthill menagerie until the outbreak of the Second World War, although he began to wind it down in the 1930s, tranferring some of the animals to nearby Whipsnade Park Zoo, which opened in 1931.

And there were new entries in the field. This was partly because rare creatures were more easily available to those with money – Ginie Courtauld bought Mah-jongg at Harrod’s – but there was also a Medici-like tendency among new country house owners to display their status by demonstrating that their wealth could command all things. Olive, Lady Baillie, the Anglo-American heiress who between 1926 and 1928 spent a fortune restoring Leeds Castle in Kent, stocked its moat with flamingoes (who flew away) and black swans, and kept a toucan, a macaw and various parrots about the place. 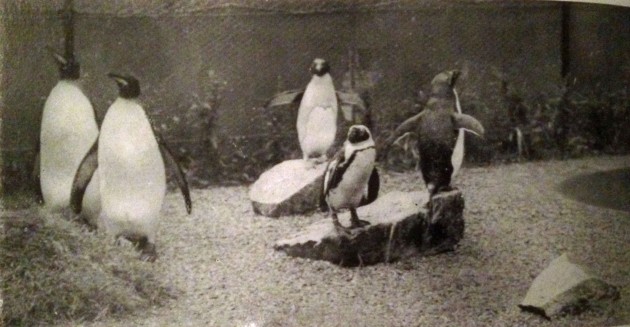 ‘The peculiar fascination of waterfowl is now felt by many’, declared Country Life in 1937. At Trent Park in Hertfordshire, Sir Philip Sassoon filled the lake – said to be by Repton – with scarlet ibis and pink flamingoes, who were kept in the pink (and presumably in the park) with a lavish diet of shrimp. Whenever he was at Trent, Sassoon made a point of personally feeding his small flock of king, rock-hopper and black-footed penguins. He also kept a herd of deer in the park and had his stags’ antlers gilded, because he liked the way they glittered in the sunshine. 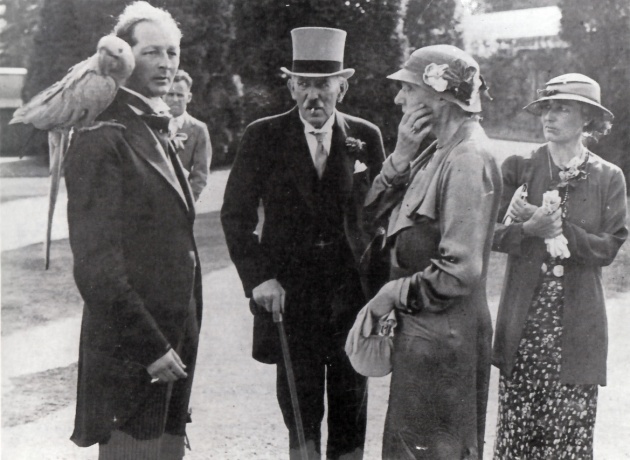 Who’s a pretty girl, then? Lord Tredegar and friends.

Sometimes an interest in non-indigenous fauna went hand-in-hand with a marked eccentricity. In his autobiography, A Silver-Plated Spoon, the 13th Duke of Bedford recalled a visit to ‘the most extraordinary house I have ever stayed at’, Tredegar in South Wales. Lord Tredegar, as well as having a parrot, a pet owl and an unhealthy interest in black magic, kept kangaroos and other animals which he used to fend off with a stick if they ventured too close while he was walking with guests in the grounds. Tredegar’s mother ‘used to flit round the house with sticks and straws in her mouth making birds’ nests, and then sit on eggs herself and try and hatch them.’