Oakley House in Bedfordshire is a pleasant if unassuming 13-bedroom mansion built around 1750 for the Dukes of Bedford. At the end of WW1 it passed to a Bedford cousin, Arthur Russell, 2nd Lord Ampthill; and a few years later, Oakley shot to fame as the scene of an event that rocked the nation and made legal history – nothing less than a virginal conception.

The virgin in question was Lord Ampthill’s daughter-in-law. Christabel Hulme Hart, a Mayfair couturier, married the Hon. John Russell, heir to the Ampthill barony, in 1918, to his parents’ dismay and, as it turned out, to his, because just before the wedding Christabel told John that she didn’t want children for a while, and that therefore they weren’t going to be sleeping together in the foreseeable future.

The Hon. John Russell. He threatened to shoot her cat.

John took this news surprisingly well. But as the months went by and his wife began frequenting fashionable nightclubs without him and teasing him about her entourage of ‘dark, sleek Argentines and Greeks who dance like dreams of perfection’, the strain began to tell. In 1919 he bought Christabel a copy of Marie Stopes’ Married Love and tentatively suggested they might use some form of birth control? She said ‘no’. In 1920 he appeared in her bedroom brandishing a gun and threatening to shoot her cat if she refused him any longer. She remained unmoved. So he turned the gun on himself and said he would blow his brains out if she did not consummate the marriage. It made no difference. Then in the summer of 1921 Christabel visited a clairvoyant, to be told she was expecting a baby. A doctor confirmed the fact and in October she gave birth to a 10lb. 8oz. boy, Geoffrey. 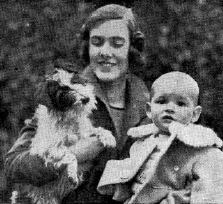 Christabel, the Russell baby and a dog

John Russell’s response was to sue for divorce. The last time they had shared a bed, he said, was when they had been put into the same room while staying with his parents at Oakley the previous December. On that occasion, no physical contact of any kind had taken place. In fact Christabel hadn’t even kissed him since August 1920. The child could not be his.

His wife gave a different version of events. She told the court that while they were at Oakley, there had been ‘Hunnish scenes’ in which her husband had tried and failed to have sex with her. She had also had a soak in a bath recently left by John – perhaps this could have led to her pregnancy? Then her counsel dropped a bombshell: doctors who examined Christabel while she was pregnant found that her hymen was still intact. She was a virgin.

The arguments over what the press called ‘the Russell baby case’ dragged on through two divorce trials. At stake was the boy’s future as heir to the Ampthill barony. Christobel’s counsel urged the jury not to leave him ‘branded with the infamy that cannot be redressed that his mother was a woman of no reputation, and he was a nobody’s child’. John’s barrister begged the jury ‘to free this young man from a tie which he hoped would be a bond of pleasure but is nothing but a rusty chain that burns into his soul’.

The first trial was inconclusive, and the second, described by one of the Sundays as ‘probably the most talked of divorce case of a generation’, ended in defeat for Christabel. The reputations of both husband and wife were in tatters. Their most private and intimate habits had been discussed at length in open court. John was widely regarded as effete and unassertive for allowing Christabel to dictate the terms of their relationship (and a revelation that he liked to dress up in womens’ clothes didn’t help). His wife was seen as unnatural for refusing to accept her wifely duties. Both were condemned for having ‘freakish’ manners and morals. George V was so appalled at the details being aired in public that he lobbied for a change in the law, and as a result, an Act prohibiting detailed press reporting of divorce cases was passed in 1926.

In the meantime Christabel appealed against the verdict, but it was upheld by the Court of Appeal. So she went to the House of Lords, and in a remarkable judgement in May 1924 the Lords overturned the decree nisi, legitimising the two-year-old Geoffrey Russell and his virgin birth.

John and Christabel were finally divorced in 1937; she never remarried. Geoffrey inherited as 4th Lord Ampthill on John’s death in 1973. His right to the title was contested by a son from one of John’s subsequent two marriages, but although he refused to take a DNA test his claim was upheld by the Lords, on the grounds that they should not now overturn the ruling they had made half a century earlier.

The family sold Oakley House in 1935.