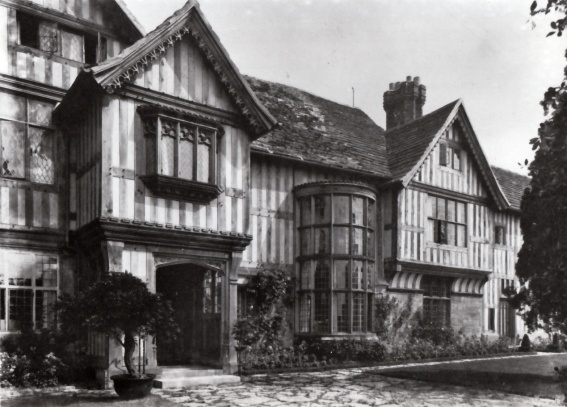 In her autobiography, The Glitter and the Gold, Consuelo Vanderbilt recalled her first sight of Crowhurst Place in Surrey. Separated from her husband,the 9th Duke of Marlborough, exiled from Blenheim and living for most of the year in London, she was looking for a small house – small by Vanderbilt standards, anyway – not too far from town, and one summer day in 1910 she found it.

‘With its high roof of Horsham stone, its walls half-timbered with silvered oak, its stone chimneys and leaded casements’, she wrote, Crowhurst ‘was a dream come true’. The owner refused to sell, but he agreed to let the house and to allow Consuelo to add to it. By the time she gave up the lease in 1921 to move to France and marry her second husband, the aviator Jacques Balsan, she had transformed Crowhurst into a vision of perfection, with roses and honeysuckle climbing in at the windows, old oak furniture ‘polished to a honeyed sheen’ and a procession of celebrities from Asquith to Lytton Strachey queuing for the chance to spend a weekend in the dream come true.

Consuelo and her 2nd husband, Jacques Balsan, in the 1930s

That’s her version of events. The story of Crowhurst Place and its rebirth is a little more complicated, involving a creative genius who doesn’t even get a mention in The Glitter and the Gold.

In 1907, three years before Consuelo discovered the moated manor house, it was taken on a repairing lease by George Crawley, an English connoisseur and amateur architect. Crawley had no technical training and no ability to make architectural drawings. But according to a friend, ‘he could yet visualize his designs so vividly as to convey his impressions to intelligent draughtsmen’.

He had just designed Westbury House, a neo-Caroline mansion on Long Island, for the steel magnate John Shaffer Phipps and his British wife Margarita. He was still working for the Phipps family in New York when he took the lease on Crowhurst, then a half-derelict farmhouse with nothing much to recommend it except a timbered great hall of 1423. Over the next three years he ‘restored’ the house and then, when it was almost finished, his wife told him she couldn’t bear to live in a building project for another day and he was forced to give up the lease.

That’s where Consuelo came in. She knew Westbury, and this may have contributed to her decision to ask Crawley to create a new service wing in 1912 and a sitting room and garden room three years later. In any case it made sense to call on Crawley who, after all, knew Crowhurst Place better than anyone living.

His reinvention of Crowhurst, what Pevsner calls his ‘crazy fairy-tale restoration’, is a joy, at once more scholarly than the romantic lyricism of Norman Shaw and the Old English movement, and less restrained than late-Victorian examples like Edward Ould’s Wightwick Manor. The tall chimneys, the gables, the half-timbering, are all new. So is the porch, which derives from the early 16th-century Guildhall at Lavenham in Suffolk. The moulded ceiling of the parlour shown here is original, as is some of the linenfold panelling, although it was moved from an upstairs room; the rest was made to match. The semi-circular oriel which lights the great hall is of teak, ‘which should last for ages’, said Martin Conway, who described the house for Country Life in 1919, soon after it was completed, and who was full of praise for the way in which its battered remains had been ‘re-endowed with a beauty far greater than was ever theirs in the day of its newness’. Almost everything about Crowshurst is invented, imagined. It really is a dream come true, and the dreamer was George Crawley.

In 1922 Crawley cast his strange spell over another late-medieval manor house, Old Surrey Hall near Lingfield. (‘The architect must have been working quite cut off from reality’, said Pevsner, comparing Crawley’s work admiringly and astutely to the rhapsodies of early 20th-century composers on Tudor and folksong themes.) He died in July 1926 at the age of 62; his obituary in the Times referred in passing to his reputation as an amateur architect, but in rather poor taste the obituarist managed to devote much more space to Crawley’s nephew’s batting prowess at Lords in the Eton-Harrow match the previous Saturday.