A few weeks ago I posted a 1939 photo of a floodlit Palladian villa on this blog, and my friend Patrick Baty commented that it reminded him of Rex Whistler’s jacket illustration of Uptake in flames. I hadn’t read The Last of Uptake? Then I must.

I always take Patrick’s recommendations seriously. Simon Harcourt-Smith’s country house novella, first published by Batsford in 1942, has been out of print for decades, but I managed to get hold of a copy and I read it at a single sitting.

Then I read it again. And again.

The literary country house deserves a blog of its own, perhaps even a book of its own. It appears as the old dark house, harbouring sinister secrets in the Jane Eyre tradition, like Manderley in Daphne du Maurier’s Rebecca (1938). It thrives as a conventional setting for the murder mystery: when weekend guests at Sir Hubert Handesley’s mansion in Ngaio Marsh’s A Man Lay Dead (1934) discover that Handesley has a collection of rare daggers, we all know that one of those daggers is going to end up buried in someone’s back before long. It becomes a powerful metaphor for a lost world in elegies like Waugh’s 1945 Brideshead Revisited.

There is also another kind of literary country house entirely – whimsical, fantastical, baroque in its imagining. Think of Ronald Firbank and Aubrey Beardsley remodelling Cold Comfort Farm, and you’re somewhere close. This is where the wonderful, weird world of Uptake belongs.

The Last of Uptake centres on the deteriorating relationship between two spinster sisters, Tryphena and Deborah Caudle, as Uptake, their ancestral home, falls about their ears. Its time is past. The days when their wild great-grandfather used to drive through the park behind a string of dancing circus horses ridden by apes are a distant memory. Only relics are left: Roman statues (‘some of them seemed scandalously pagan’); a set of ivory chairs from India, inlaid with ‘the more embarrassing details of some heathen ritual’; glass cases filled with outlandish decorations, ‘sapphires poised like humming-birds on branches of the slenderest enamel, jade spoons the colour of the mist outside…’ As the paint peels and the plaster falls from ceilings, Deborah nurses her hypochondria while Tryphena thinks back to her youth when she was close – very close indeed – to her late brother Adolphus.

But the star of the story is Uptake itself – decaying, marbled, swathed in sea-mist and secrets and grand guignol. The saloons and staircases, the winding alleys and grottos of its gardens, are all full of surprises: sinister dragons lurk among the bells of a lakeside Chinese pavilion; a pyramidal ice-house provokes Tryphena into imagining herself engaged ‘in some awful Egyptian rite’.

And then there are the automata. Tryphena’s wicked great-grandfather had peopled the gardens of Uptake with an army of life-size mechanical figures. Some are broken. Others have disappeared. ‘There had been a number that Tryphena’s mother had tactfully described as unsuitable; these had been removed, and were kept in a padlocked storeroom into which nobody in Tryphena’s time had dared to penetrate (she had often caught herself wondering about their exact nature and, ashamed, had turned her mind elsewhere…)’. A few, like the Dancers, are still in working order:

There began a whirring and a clicking; a hidden pipe-organ coughed twice and fell into an air of such unexpected vitality Tryphena almost jumped. A mirrored door came slowly open: through it there tripped with a stiffness scarce perceptible the Dancers… They were truly lifelike, Tryphena thought, as the gallant jerked a bow and his ballerina dipped a curtsy to her. Then they were absorbed in the dance…

The mansion’s end comes as no surprise, prefigured as it is in Whistler’s cover illustration. But when I reached the last of Uptake, I couldn’t help but regret its loss and the loss of the fragile, curious world to which it belonged.

And the author? Simon Harcourt-Smith began his career as a diplomat; The Last of Uptake was written to distract his wife during the Blitz, when she was an invalid in plaster. He floats through the pages of James Lees-Milne’s diaries (doesn’t everyone?); and wrote a clutch of other books on subjects ranging from Babylonian art to the life of Lucrezia Borgia. Otherwise, the author of one of the 20th century’s most delightful country house stories is a mystery. The Last of Uptake was serialised on BBC Radio 4 in the summer of 1977, but this exquisite book has been out of print for nearly half a century.

I really don’t understand why. 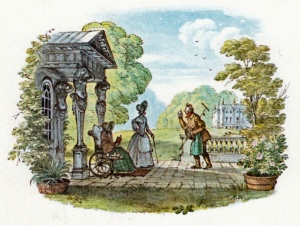 One thought on “The Last of Uptake”